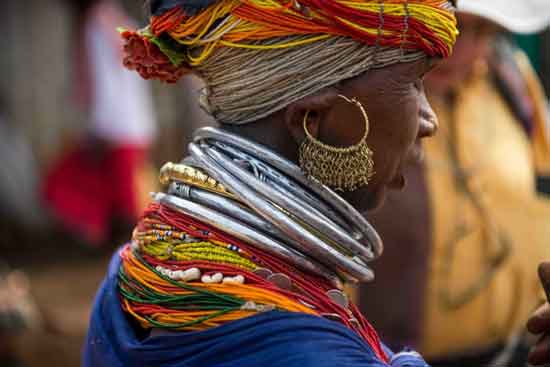 The state of Odisha , previously known as Orissa is one of the states with the highest population of tribes in India. Presently it is the home to 62 kind of indigenous people also known as “Adivasi” in local dialect . Each of the tribes of odisha differ from each other in terms of behavior , social organization , culture and language . The tribes also speak their own dialect which differs from the dialect of the other tribes of Odisha.

The Kondhs have the highest population in Odisha and can be found in the districts of Kandhamal , Rayagada , Koraput and Malkangiri. The Odisha Tribal Tour gives the guest a very nice opportunity to meet and interact the Dongoriya Kondhs on every Wednesday morning at Chatikona , which is at a distance of about 60kms from the town of Rayagada.

The Dongoriya , as the name suggest , it is derived from the word “Dungar” which means hills , So the word Dongoriya means “people of the hills “ . The Dongoriyas mostly reside on the hills of Niyamgiri , on which they cultivate many fruits ,vegetables and worship the Hill god also known as “ Niyam raja “ . On every Wednesday the Dongoriyas walk down from the hills with fruits like Jackfruit , Pineapples , Berries and Bananas to sell at the local market which is also termed as “haat” in local dialect . The Money that they get is used to buy rations for the week which include : rice , kerosene , salt , sugar etc.

The Kondhs in the past performed human sacrifice to please the mother goddess. This was abolished by the British but the sacrifice did not stop , instead of a human they used now an animal like a pig , buffalo or a cow . The Mariah Festival is one of the most important festival of the Kondhs in Odisha . The animal is tied on a sacrificial pillar and is left to bleed so that it can shed blood on the ground to please the gods who would provide good rainfall for the crops in the coming years.

In the Odisha tribal tour on the Thursday Morning we travel 75 kms from Jeypore to a place called Onkudelli . A very colorful weekly market begins here every Thursday morning from 9:00 Am . The Bondas and the Gadabbas frequently visit this haat to sell their local products.

The Bondas are one of the most ancient tribes found in Odisha . They speak a very ancient and difficult dialect .The women can be recognized by the beautiful colorful beads that they adorn with their head shaved and wearing a short skirt called as “ Ringa “ . The Men are very alcoholic and aggressive , always carrying their bows and arrows.

The odisha tribal tour is a very nice tour which Alternative Tours ,a tour operator in Odisha  promotes in the month of October till February . In this period of time the guests can also have the opportunity to experience a festival in odisha . The tour normally begins in Bhubaneswar and can end in Vishakapatnam . The agency also promotes other odisha tourism related destinations like Puri , Konark , Dhenkanal , Bhitarkanika ,Sambalpur etc.