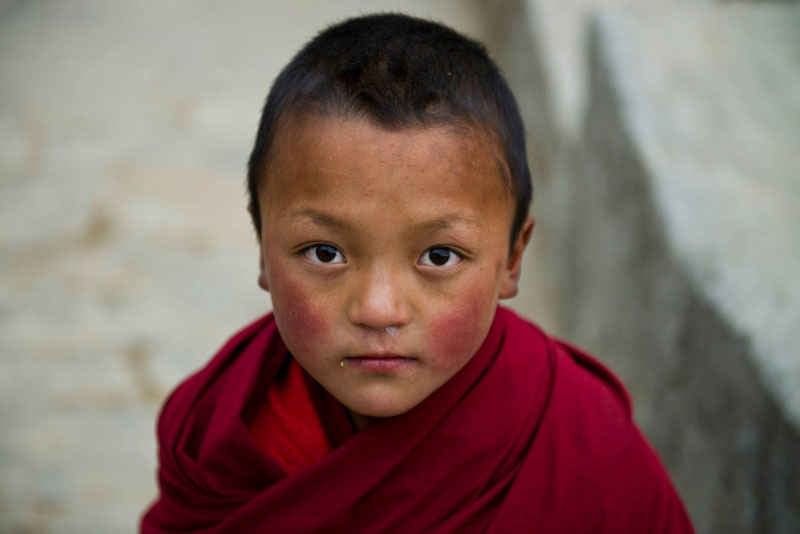 Tawang is situated at a height of 3500 mtrs from the sea level on the mountainous range of the northern Himalayas in the western most part of Arunachal Pradesh .The region is inhabited by the beautiful Monpas who always smile and greet people with “Tashi Delek” . Gifted with the snow capped peaks , pleasant lakes , soothing climate , friendly and hospitable people , it entices the tourists with its virile nature.

The Monpas are followers of Buddhism and are mostly Agriculturists by profession. They practice terrace cultivation and rear sheep and yak.

CLIMATE & WHEN TO VISIT

Climate of high altitude places in Tawang is very cold where as in low altitude places have humid climatic conditions .Rainfall begins in the month of April and continues upto August . There the period September to March is best suited for tourists to visit this place. During this period the sky remains clear flooding the sunlight  that makes the sightseeing an enjoyable experience . Streams of clean water are seen flowing .

BHALUKPONG : There is an ‘ORCHIDARIUM’ (place where orchids are grown)  at Tipi and is considered to be the botanical paradise of the state . There are about 300 species which can be seen in the floral glass house.

BOMDILA : Located at a height of 8500 ft , Bomdila is the headquarters of the West Kameng District , it is also the land of the Sherdukpen tribe.

DIRANG : Dirang is a heritage town and is also home to the Monpa community . You can visit the ancient Dirang Dzong once you get here. It is also famous for apple and kiwi orchards .

SELA PASS : The Sela pass is on the way to Tawang and is situated at a height of 14000ft .Most of the times it is covered in snow and one would have to wait for the army to clear the roads. You can stop hear for a cup of tea and hot noodles to enjoy the beauty of the lake .

JASWANT GARH : In the battle of Nuranang in 1962 during the Chinese aggression a brave boy of the country showed valor by holding the army for 72 hrs all alone before he met the martyrs end . A war memorial has been built here to remember his brave deeds. People stop here to have a hot samosa and cup of Indian Masala Tea which is offered by the Army.

TAWANG MONASTERY :
The monastery was founded by Mera Lama Lodre Gyatso and is said to be the largest monastery in India . The name Tawang means “the Chosen Horse” and is one of the biggest Buddhist monasteries outside of Tibet . The monastery is 3 stories high and has 65 residential buildings inside its premises. The library of the monastery is said to contain old and valuable scriptures Kangyur and Tengyur .

At the entry point there is a beautiful and colorful structure known as Kakaling that features various Mandalas. The monastery is also a school for Buddhist cultural studies . The monastery houses about 450 monks now and can accommodate around 700.The main temple is known as Dukhang  and house a statue of Buddha which is 18 feet tall in seated position .

The main festivals celebrated here are Choksar , Losar , Torgya and Ajilamu . The sole objective of these festivals in Tawang is to ward off evil spirits and bring peace and prosperity among the people

URGELLING GOMPA : This monastery is also the birth place of the 6th Dalai Lama . It is located about 5 kms from Tawang . It has many ancient relics and also the footprints of the Dalai lama which are preserved carefully for worship.

ANI GOMPA : It is the oldest Ani Gompa in Tawang region . It houses about 45-50 Buddhist nuns. Built in the period of 1595 AD the monastery is situated at the top of the mountain laced with natural scenery and is a historical place where the Mera Lama prayed long for divine light in a cave.

TAWANG WAR MEMORIAL : There is a beautiful Stupa in the memory of the brave soldiers who sacrificed their lives in order to protect us in the 1962 during Indo-China war . It is a must for all visitors , for this is where one can salute and pay homage to the saviours of our future.

NURANANG WATER FALLS : One can see the beauty of these falls near tawang and the micro hydel power station in Jung on the left bank of Tawang.

MADHURI LAKE : The original name of the lake is Sangetsar Tso , but locals have been calling it ‘MADHURI LAKE’ after the famous bollywood movie Koyla was shot here. It was formed during the earthquake of 1950 and is very beautiful with snow capped mountains and peaks.

HOW TO REACH TAWANG ?

One can reach Assam via Guwahati by road . The airport in Guwahati is well connected with most of the cities in India . There are daily sumos and taxis running from Tezpur and Guwahati going upto Dirang and Tawang .

Foreigners wishing to go to Tawang and other parts of Arunachal Pradesh must obtain a RAP from a registered tour operator . Normally the permits cost around 60$ per person.

The options of hotels in Tawang are limited . Our top pick are the following :